Termites destroy 1 in every 3 homes

This is a staggering amount of homes, just look down your street and imagine every third home affected by Termites, now if that doesn’t frighten you may be the photos in the photo gallery will make you aware of just how destructive these insects are .

The photos in my photo galleries show Normal homes just like yours and mine until a termite inspection for prospective purchasers or worried home owners discovered termite damage as seen in the photo gallery.

Most owners were totally unaware of the damage that had occurred , structural pieces of their roof had been  destroyed by termites, the people not only lost the sale of their home but had expensive repairs to carry out all of which could have been avoided with regular at least annual inspections for peace of mind get a inspection done, don’t let this happen to you.
In the photo gallery you will observe a mud ball this  Mud ball was created by Termites ,it was discovered during a termite inspection on a service station hidden behind a freezer .

Termites love power points and light switches as they enjoy the heat emitted by the electrical current.

This is a extreme case of termite mudding but it can happen to normal homes also as power point are often hidden behind televisions etc where furniture is left unattended for prolonged periods.

The termites that caused this damage was Coptotermes Species which is the most destructive of all localised termites. 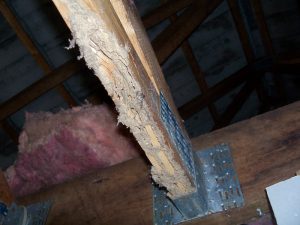 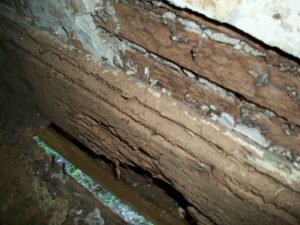 Termite damage to flooring and skirting boards in Stockton NSW 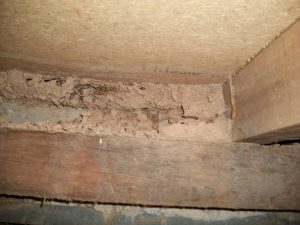 Termite workings in the sub-floor between the floor and bearer 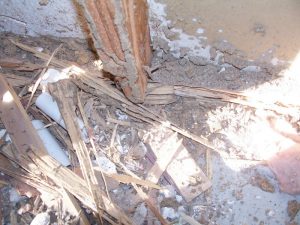