Most termites are found in the hotter regions of Australia with over 100 termite species present in the Northern Territory of Australia alone.

There is only one living species in this family, the Mastotermes darwiniensis. They are found in tropical north of Queensland, North Territory and Western Australia. They have not yet been discovered in Brisbane.
They avoid areas of high rainfall.
They are the most destructive termite in Australia.
It attacks any wood in contact with the ground including shrubs,trees ,it can also eat leather,clothing and paper.
They make Subterranean nest (under the ground) and can also nest in tree stumps and the root crowns of trees. 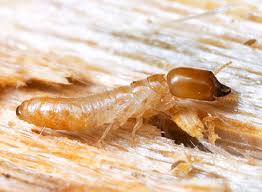 Kalotermitidae – Drywood Termites
Termites in this family build simple nest in dry or damp dead wood above ground. The whole colony live in a serial of galleries and chamber in the wood, i.e., they live surrounded by their food. Their colonies are small in size. One genus, the Cryptotermes,in this family poses major economic problems. It is the main group in Drywood Termites.
They never require contact with the ground.
They obtain their moisture from the atmosphere and therefore are found more in tropical areas where it is humid and the moisture content of timber is over 20% at most times.
West Indian drywood termite (crypotermes brevis)  has been detected in Brisbane Maryborough (Queensland) and Sydney but has been treated by Fumigation and remains absent from Australia.
The Ringant termite also belongs to this family (neotermes insularis). They occur over Eastern Australia from Victoria to the Torres Strait Island. It is tree forest pest, living mainly in upper branches, Eucalyptus are its main hosts, causing no damage to buildings.

Termopsidae – Dampwood Termites (Porotermes adamsoni)
Termites in this family build simple nest in wood, usually with moist. The whole colony live in a serial of galleries and chamber in the damp wood, usually rotten and above ground, including the heartwood of living tree. Their colonies are usually small in size. Those termites cause economic problems are not in this family.
They are pests of forest trees, forming pipes and thus degrading logs for various timber uses.
They will attack timber in ground contact such as poles, fencing and weather boards. Usually they will not attack buildings unless there is timber soil contact allowing access to other timbers.
They require damp decaying timber to initiate attack. 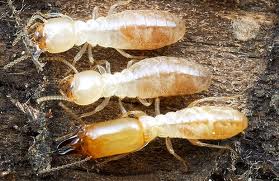 Rhinotermitidae – Subterranean Termites
Most species in this family have large colonies and build compact nests. They build large to very large mounds, up to 2m high. The genus Coptotermes in this family includes the termites that do most economic damage.

Heterotermes ferox often found attacking posts, posts, paling fences,weathering flooring and flooring of houses. Distribution is wide throughout Australia.
The Coptotermes Species are the most commonly found termites in domestic homes .
Coptotermes acinacifornis are subterranean termites and build underground nests. They occur all  over Australia except in a few isolated areas
Coptotermes frenchi live in nest on the ground in mounds.This species occurs from Northern Queensland to south Australia but have been found in other areas of Australia also.
Coptotermes lacteus occur in Victoria,New South Wales,Australian Capital Territory and Southern Queensland.
Coptotermes michalseni occurs in south western Australia, South Australia and the Murray Valley region of New South Wales. and makes low dome shaped mounds and can be often confused with Nasutitermes exitious. They do not attack buildings.
Coptotermes raffrayi occur in south Western Australia only , they also make small mounds near trees and stumps and do damage buildings.

This genus of termites is widely distributed throughout Australia .
They are responsible for more than 80% of the termite damage caused to buildings.

The termite colony can contain more than a million termites.

Coptotermes Species can travel at least 50m from the colony in search of food via a series of underground tunnels (mud tubes).

Coptotermes acinaciformis tend to recruit strongly to new food sources and respond strongly to baits.They are the most commonly identified termite species in Northern NSW.

Coptotermes frenchi tend to explore widely for new food sources and often feed lightly at multiple points.
They are harder to control with termite baiting but do respond to the baits given a longer time period
The soldier caste of Coptotermes is mandibulate with simple brown saber-like jaws.
Soldiers measure between 3.5mm and 6.5mm in length.
When disturbed these soldiers eject a white rubbery glue-like substance from their heads as a defence mechanism if you put your finger near them in the defence mode they can stick to end of your finger .